Now this has been something that has been playing on my mind a LOT lately as the due date creeps ever closer. When I look back to how we did things with Bear, I feel that mostly things went to plan. We were definitely blessed with a chilled baby which I know makes up for about 99% of how things are going to pan out and the other 1% are the bits you actually put into practice. 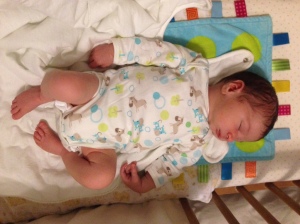 He slept amazingly (yep, probably looking back with rose tinted glasses). That sounds massively arrogant, but it’s true; he was a lazy sod that loved his sleep. By 8 weeks he was sleeping through 7-7 and I would dream feed him at about 10.30pm. Having been a nanny for 8 years prior to having him was a massive help and insight to what it would be like. I knew how much harder things would be further down the line if I didn’t sort out things early on. Hindsight is wonderful as well as a bitch! This is a very personal discussion as I know each person is so very different and we all raise our children the best we believe. However, I know sleep is so majorly important to me. I am the grumpiest person ever if I’ve not had enough. I wonder if my husband and I would still be together let alone have number two on the way if we’d not cracked onto sleeping early on.

Routine…dare I even mention the word without being pounded upon? Yep, Little Bear went into a routine I’m afraid to say. This was mainly due to forces out of our control (he wouldn’t latch for the first 4 weeks so I was having to express and bottle feed; a logistical nightmare to be honest, but I had to do it every three hours otherwise I’d have had a pump attached to me 24/7. Not as cute as a little baby I must say!) After those first weeks when he started feeding properly we were already in the swing of things. I can’t say I was particularly strict with it, however, it was etched in me from doing it for so many years, that it just worked. It fitted round playgroups, we both got a lovely long afternoon nap and he slept through at night. For us it just worked. I’m hoping number two will fall into the same routine as I think my body clock will just naturally move itself in that way whatever happens.

I shall try and do things the same with number two, but its hard to think like that when everyone tells you ‘you never get two the same’ I feel I’m already inflicting on this little bean ‘you’re surely never going to be as easy as your brother’. Obviously things will be different. We won’t be sat there focusing all our attention on this new little person, as there’ll be a bigger louder Bear demanding our attention.

So I’m wondering; what, if anything you have learnt from bubba number one and what did you do differently the second time round? What really worked for you? I’m intrigued to see what people insights are to this. Also, those that have had bubba number two (or three or four) any tips or tricks for dealing with two titches?